Walking into Mountain Sounds Festival, I was pleasantly surprised by the bush doof-inspired set-up. By doof-inspired, I mean decorative overhead shade constructions made from multi-coloured fabrics and huge bamboo structures sourced from outback techno and psytrance festivals like Strawberry Fields, Rainbow Serpent Festival or Subsonic. This atypical festival design was most certainly an innovative move by Mountain Sounds to compete with the increasingly prevalent boutique festivals popping up in recent years.

The landscape was quintessentially Australian as well. Think dirt and dust in abundance, haystacks, gum trees, scorching suns and bull ants as hefty as a big toe. One of our team, Jameel, was made aware of their existence the hard way. 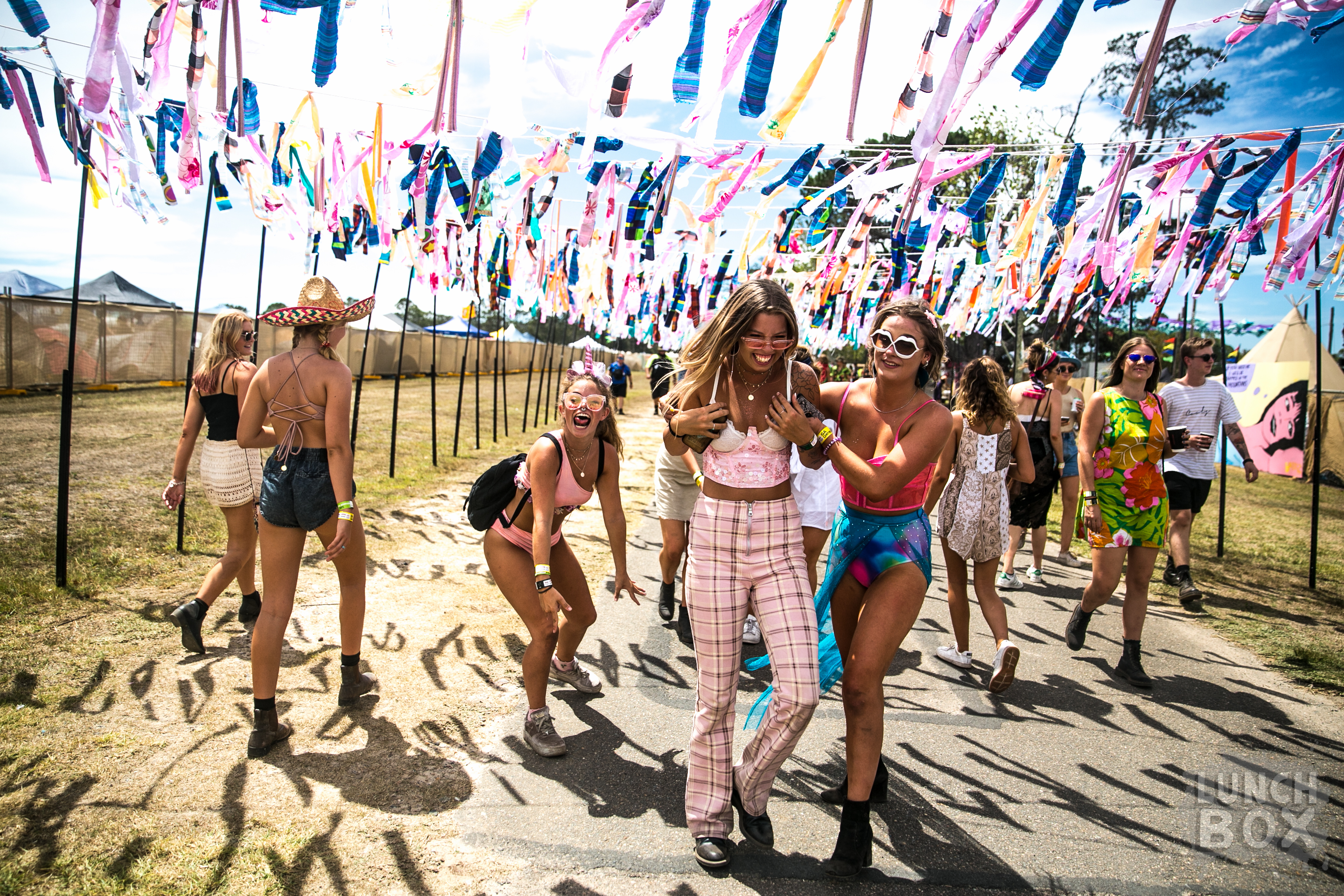 In the depths of Somersby an afternoon drink could be enjoyed with the backdrop of singing kookaburras and crickets as roaming horses and cows hung out in the surrounding padlocks – welcome to ‘Straya, mate.

I’ve tried to pinpoint the moment when a lot of festivals became equally as about the fashion as the music, and my only logical explanation is that our glorified social media society has taken over the humble festival bucket hat. Needless to say, there was a visually stimulating plethora of glitter, skintight body suits, ’70s-inspired platform boots, unicorn accessories and anything pink, fruit-related, fluffy or patterned.

When most of the camping punters finished setting up at around 2:00PM, they began rolling into the festival grounds to enjoy a vibrant array of house and techno DJs at the Barney Cools stage or the Bus Stage – which offered fantastic vibes and tunes to bop along to between main acts. There was even a fabulous Electric Lady Stage on Friday dedicated to all the hard-working female musicians and DJs paving their way in a largely male-dominated industry.

This stage featured the lovely Sammi Constantine, ELASKIA, Alex The Astronaut and GL – just to name a few. I was also very impressed by the array of powerful female acts gracing the main stage, which featured Ali Barter, Amy Shark, Woodes, Peking Duk & Flight Facilities live vocalist Michaela Baranov, and of course the hypnotic presence of Isabella Manfredi from The Preatures – but we’ll get to that a bit later… 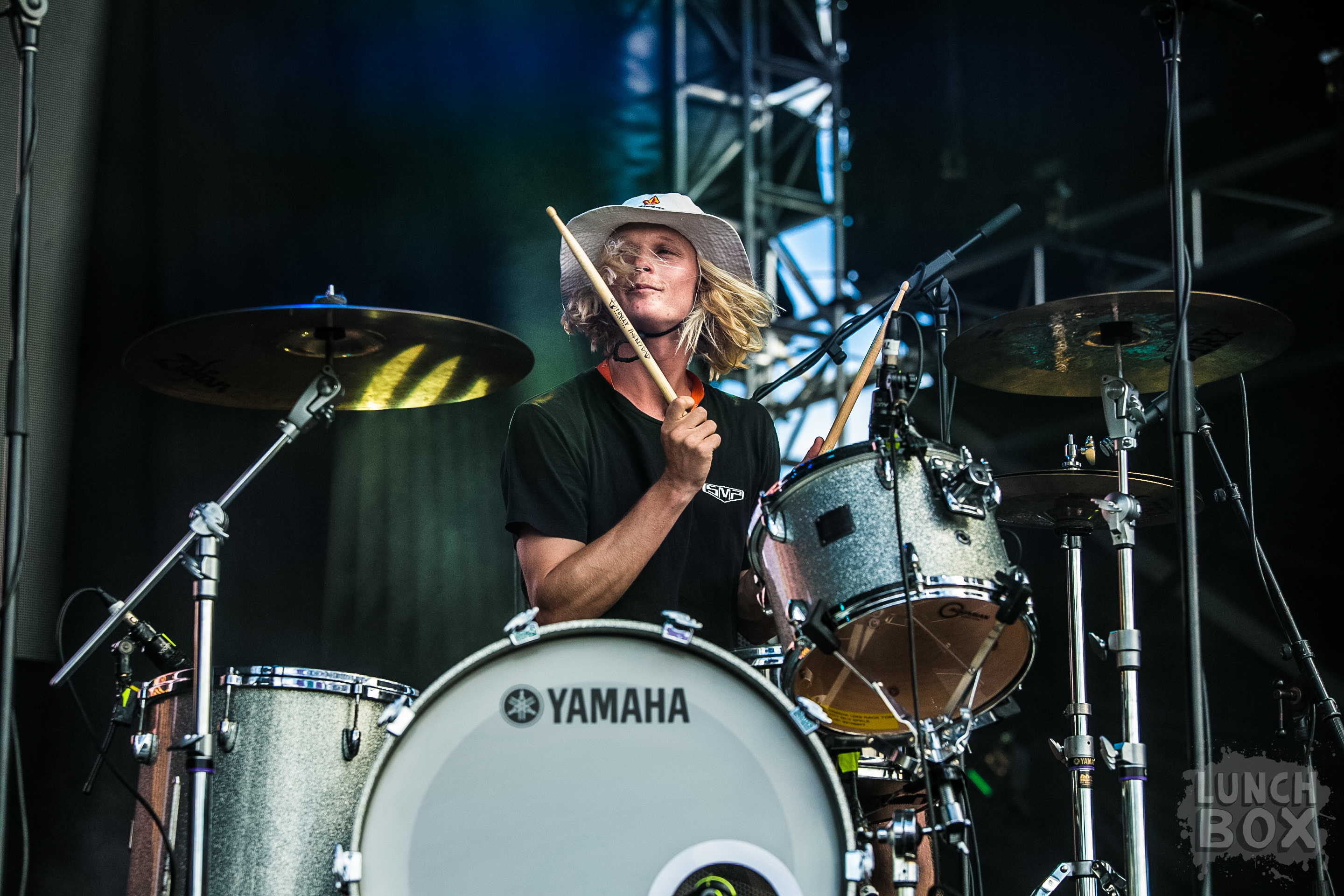 After a hot day of setting up, exploring the festival grounds and grooving to some up-and-coming artists, we were keen to see the lively PACES – passport name Mikey Perry. His 6:00PM set meant we could enjoy the buoyant electro-pop tunes with a mood-setting sunset to enhance the ambience. The Gold Coast-based producer released a dope new single Going Mad just last month and we were super eager to hear it live.

Perry started with his classic mixes of 1993 and Keeping Score while his animated dancers bounced around on either side of him wearing matching sportswear. Perry’s backdrop had changed since the last time I saw him live, now featuring his name in different colours and styles, as well as random images of pugs. Woodes joined the stage after a few songs wearing intergalactic silver pants and a feathery top. Her awesome new song Origami was met with cheers and screams – who wouldn’t be impressed by such an angelic voice? The set finished with Perry’s new banger Going Mad, followed by Savage and the crowd went wild as confetti flew everywhere. 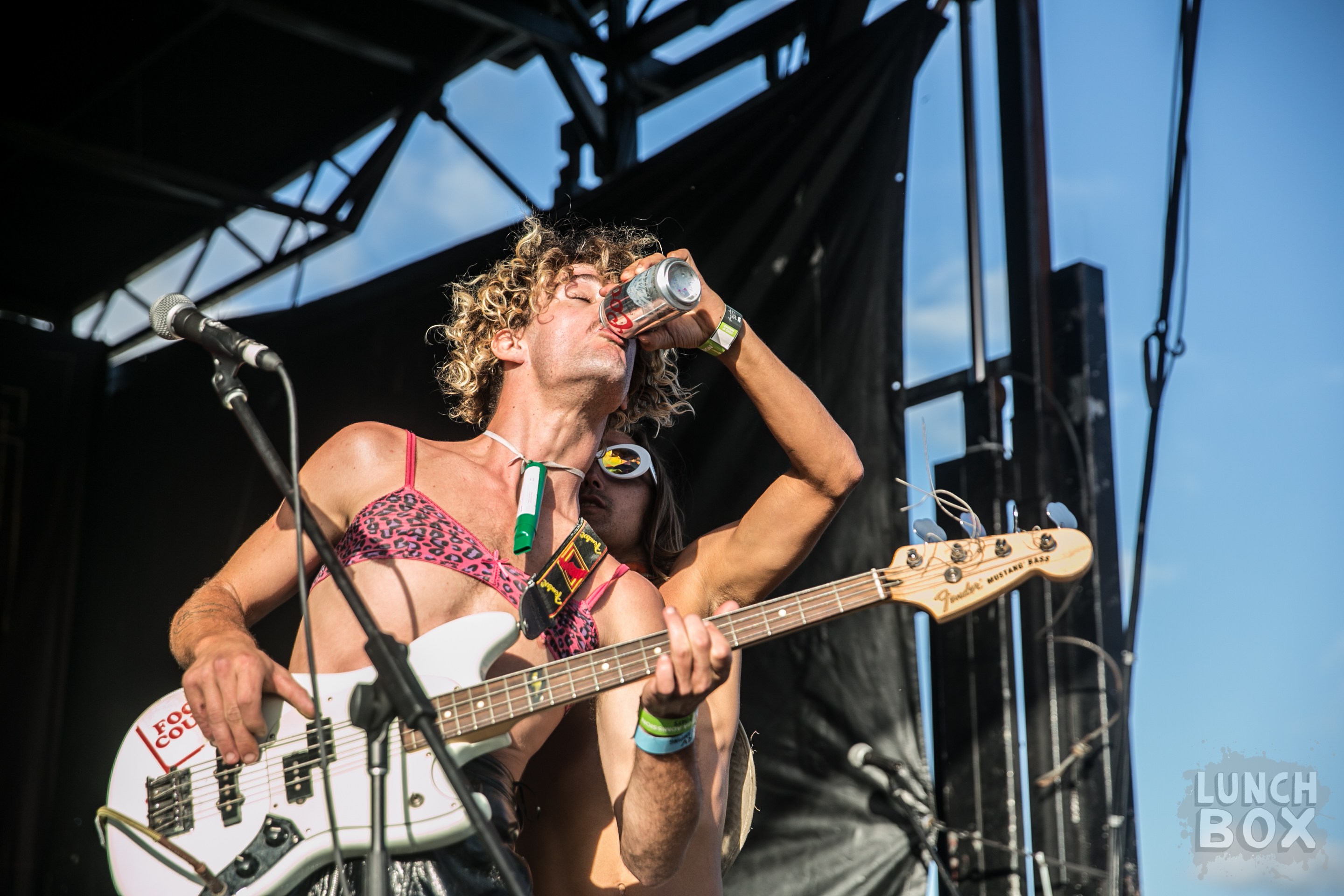 Sydney-based house singer-songwriter and producer Hayden James glided onto the stage just as it got dark. The crowd roared as he started with his 2016 hit Just A Lover, followed by a cover of Camelphat & Elerbrook’s Cola. The vibe was insane as James played banger after banger while hypnotic images of rolling waves and kaleidoscopic graphics projected behind him. When he played his most recent hit Numb, we lost our minds – the tune didn’t make it to the top 30 of the triple j Hottest 100 list for nothing. Ending with Something About You, everyone sung along, groovin’ low. 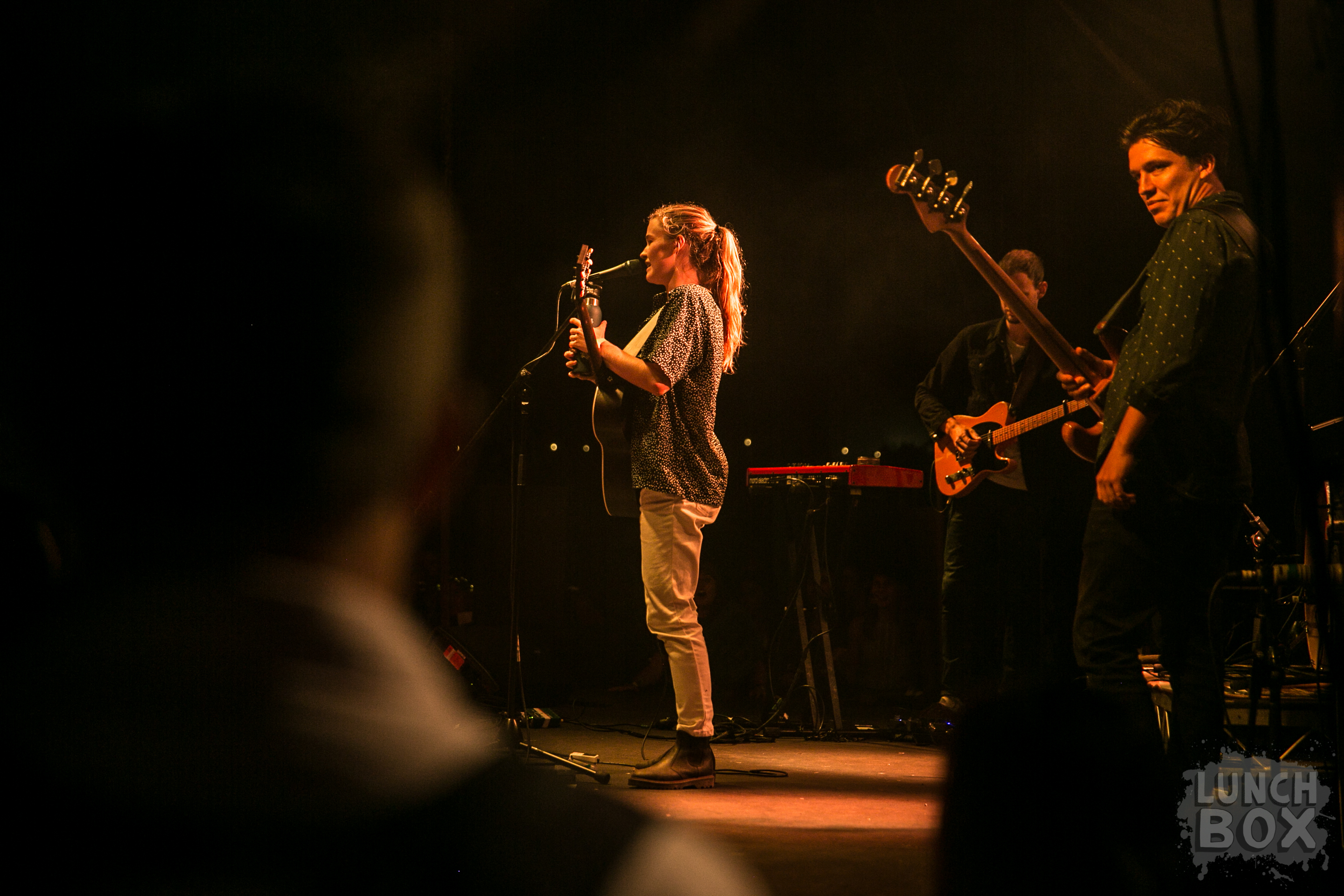 We managed to catch some of Alex The Astronaut– otherwise referred to as Alexandra Lynn – before Gang Of Youths. Her distinctive music style, described as ‘folktronic’, can definitely be compared to Courtney Barnett. Lynn had a down-to-earth stage presence as she sung Not Worth Hiding – a beautiful song about coming out.

Gang Of Youths. The indie rock band consisting of lead singer, guitar and piano player David Le’aupepe, Max Dunn on bass guitar, Jung Kim on keyboards and guitar, Joji Malani on lead guitar and Donnie Borzestowski on drums, absolutely killed it in the Hottest 100, coming second for Let Me Down Easy, with The Deepest Sighs, The Frankest Shadows and What Can I Do If The Fire Goes Out? also in the top ten! 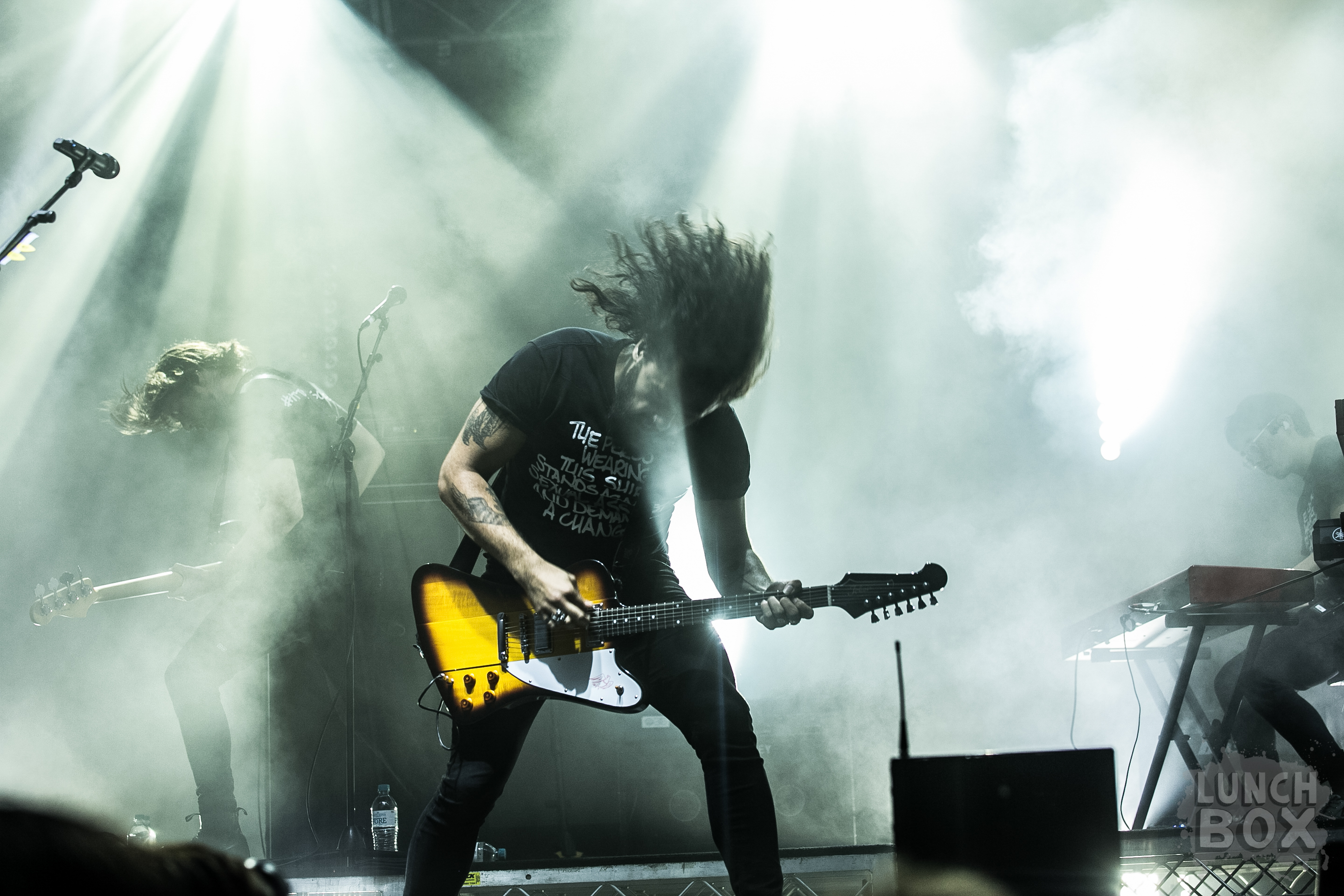 Starting strong, Le’aupepe beamed out, “This song is very uncomfortable” as they went into The Deepest Sighs, The Frankest Shadows while we all sung along to the raw lyrics: “Not everything is something honey / So say the unsayable / Say the most human of things.” The captivated crowd swayed their totems in the air in unison with the melody as the band beckoned out, “We love you, we love you. Take care of each other out there tonight.” Le’aupepe waved his twinkling fingers in the air along to Magnolia as the deep, insightful lyrics juxtaposed the upbeat, playful melody. I never get sick of this song, and it appears neither does anyone else, as punters eagerly jumped on shoulders to catch a glimpse of Le’aupepe’s iconic dance moves.

Underwhelming for me, the headline of the evening was Hot Dub Time Machine. We could hear Tom Lowndes doing his thing – counting from the year 1953 as we walked back to the campsite. Personally, I’d rather enjoy the classics on vinyl. 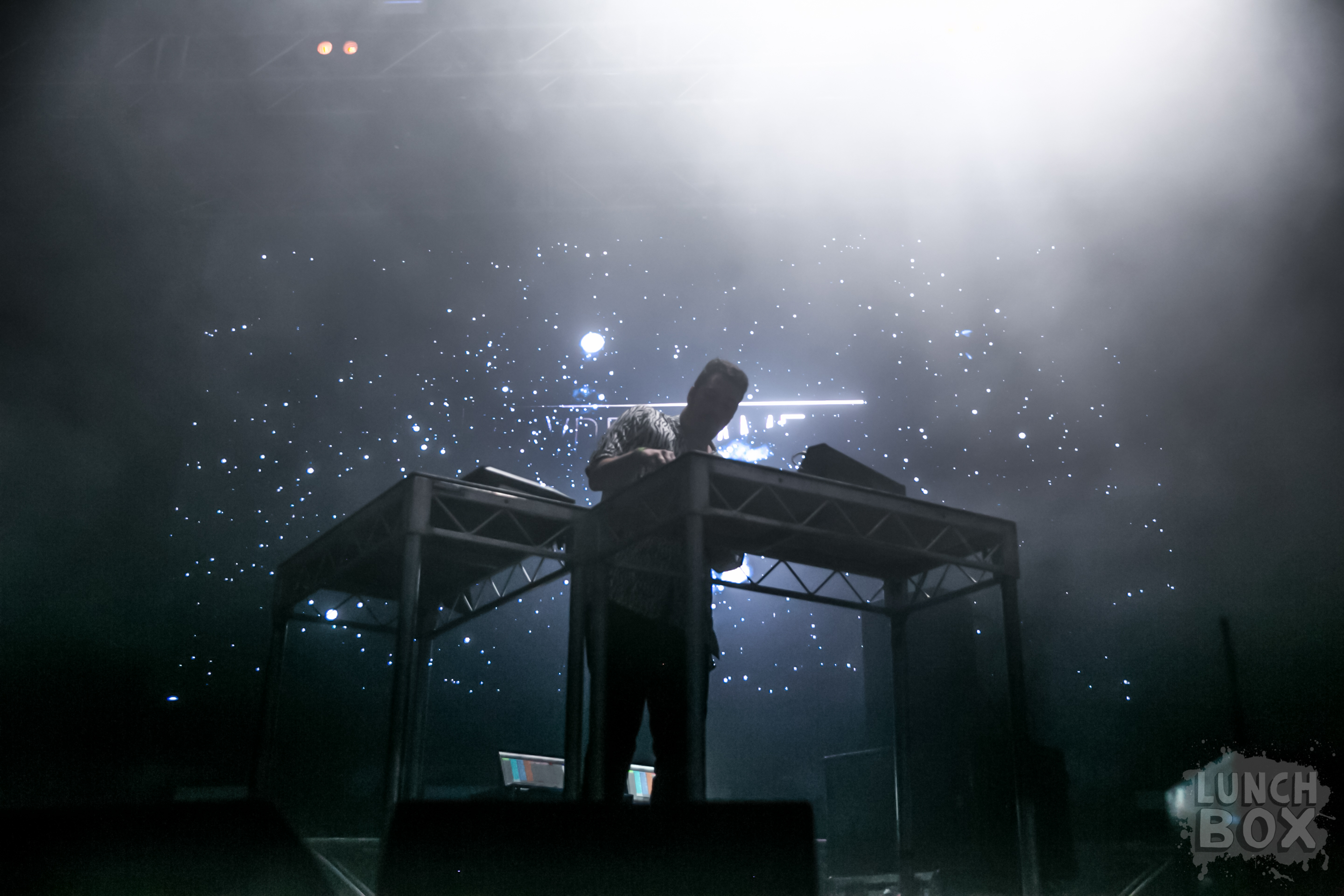 Naturally, day two started a lot slower than day one, as hungover punters rolled out of sleeping bags and towards the endless shower and coffee queues.

We lazily strolled around seeking shade and cold drinks as single-day ticket holders arrived looking way too fresh for the likes of us dirty campers covered in mozzie bites and sweat.

By mid-arvo we were sufficiently caffeinated, decently dressed and ready to see Melbourne-based indie pop, singer-songwriter Ali Barter – famous for her 2016 hit single Girlie Bits. Starting with Cigarette, Barter instantly charmed the crowd with her earthy persona and gentle, yet distinct voice. Her blonde hair was in a braided bun, while she strummed a sleek turquoise guitar.

One Foot In had the masses twirling and swaying while other chilled punters hung up the back in the shade. She tested out a “brand new song” called Backseat and we loved it – already singing along to the catchy lyrics by the second verse. Ali finished with Girlie Bits, and we all sang along to her powerful feminist lyrics – “Give us a smile princess / It’s better for business.“ 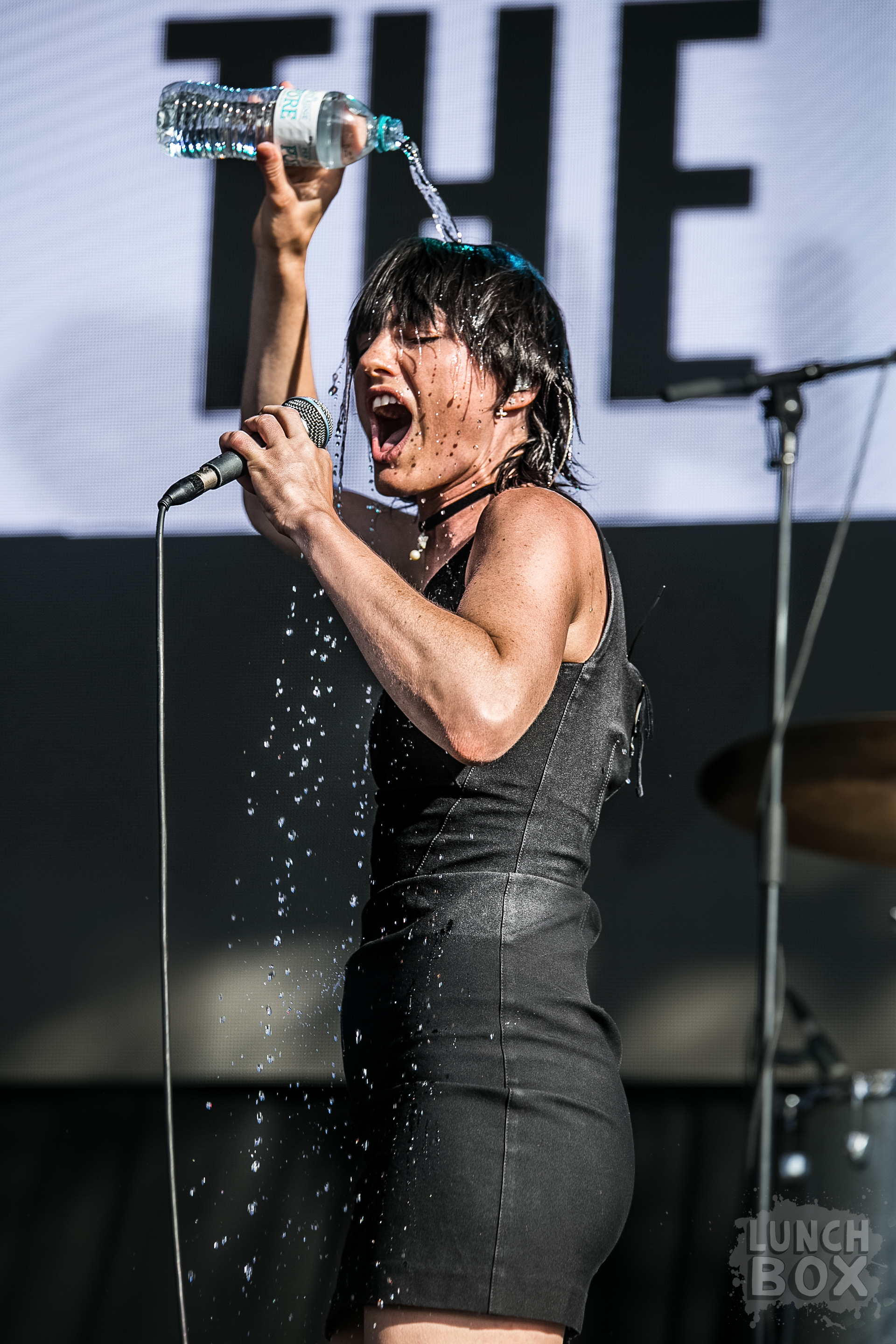 Rock’n’rollers The Preachers were back to back with ‘Merican indie pop band GROUPLOVE – giving an eclectic mix of tunes for the sunset sessions. The Preachers’ guitarists Jack Moffitt and Luke Davison looked the part of a true rock band, wearing cowboy hats and tight jeans, while an array of wild curly hair rustled in the wind. They played classics Ordinary and Is This How You Feel? to get the crowd rowdy, before finishing with Yanada from their magnificent latest LP Girlhood. Isabella Manfredi’s stage presence was breathtaking as her subtle art of not giving a fuck infected us all (at one point she poured a bottle of water on her head with total disregard for her IEMs). Unable to contain ourselves any longer, we let loose and screamed along with her – not giving a fuck about losing our voices.

In stark contrast, GROUPLOVE blasted their cheerful tunes such as Tongue Tied, Ways To Go and Colours while we bopped up and down as the sunlight peeked through the tents in the distance – making its way to dusk.

We couldn’t wait for the last two acts of the festival – SAFIA and Peking Duk, stocking up on food and drinks before the explosive finale.

SAFIA started strong with Make Them Wheels Roll followed by Counting Sheep. Everyone sang along in their best mechanical voices, “Tick tock, make me creep” while robotic graphics danced behind them. The boys were perfectly in-sync – a testament to a well-rehearsed act, despite not having 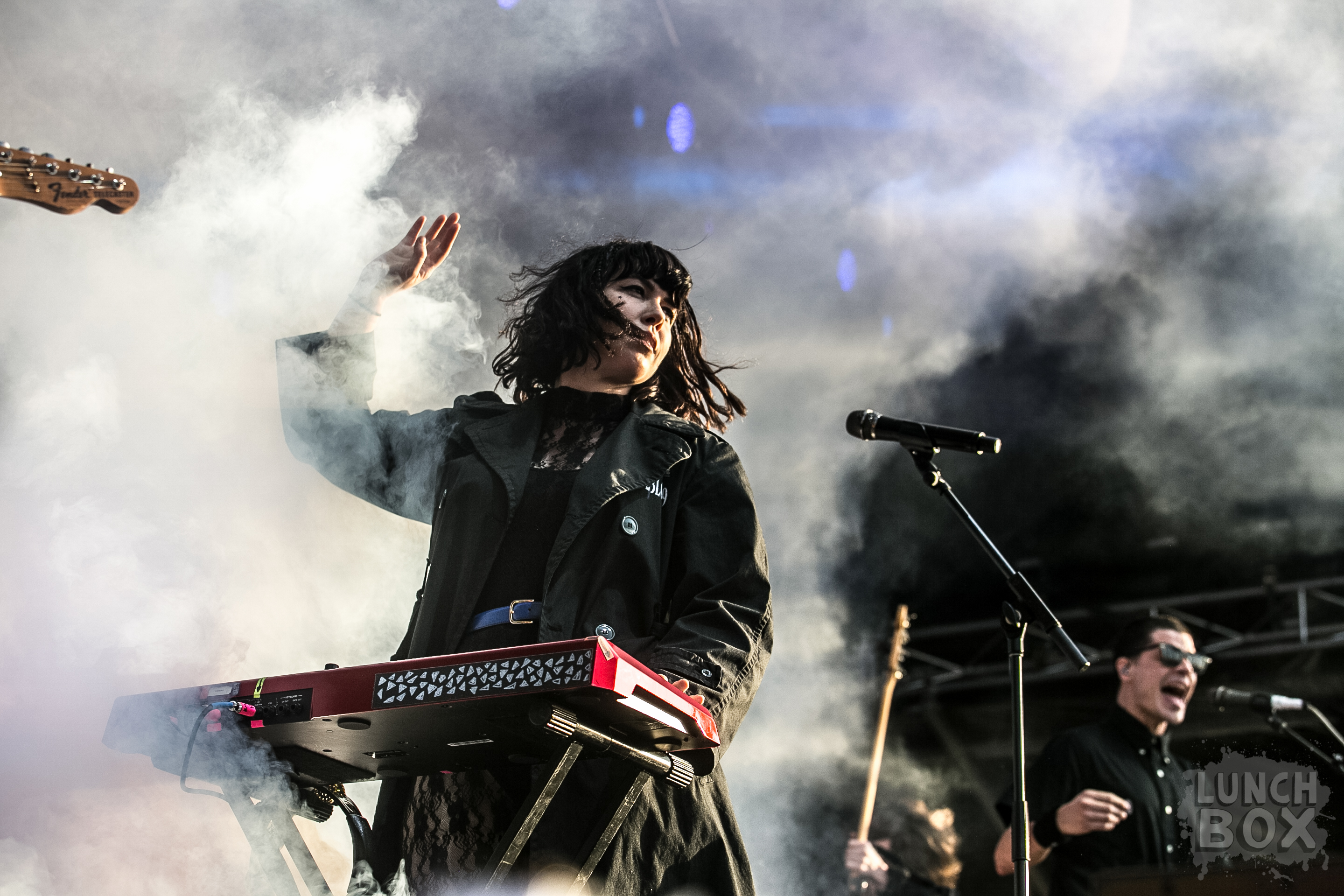 played a festival set in a while. Harry Sayers is master of what looks like way too many instruments for comfort, and everyone kept their cool while the techies fixed a few monitor issues through the early songs. A vivid intergalactic backdrop and angelic pink and blue lights framed the stage as Listen To Soul, Listen To Blues echoed out. Lead singer Ben Woolner’s delicate soprano voice enticed everyone to sing in unison as the set heated up again to finish with epic 2015 hit Embracing Me.

At 11:00PM Peking Duk literally dove onto the stage. The Canberra-originating electronic duo Reuben Styles and Adam Hyde have had a diverse music history – from huge EDM bangers to pop collaborations with the likes of Aluna George, SAFIA, Passion Pit and Elliphant. The energetic duo started with their strongest EDM electronic mixes while fire blasted upwards from the stage. Halfway through their tremendous set, the two transitioned to their latest pop hits, Wasted, The Way You Are and Say My Name; here SAFIA’s Ben Woolner and Michaela Baranov joined the stage to bring some epic vocals to the show. Everyone screamed along “Say my name… La La La La La La La / La La La La La La La” as Woolner’s voice reverberated throughout the whole festival. The 2017 Aluna George collaboration Fake Magic went off, followed by Take Me Over – what a bloody treat! Woolner’s hair literally caught on fire from the pyro cannons, but he kept singing anyway – what an absolute LEGEND. 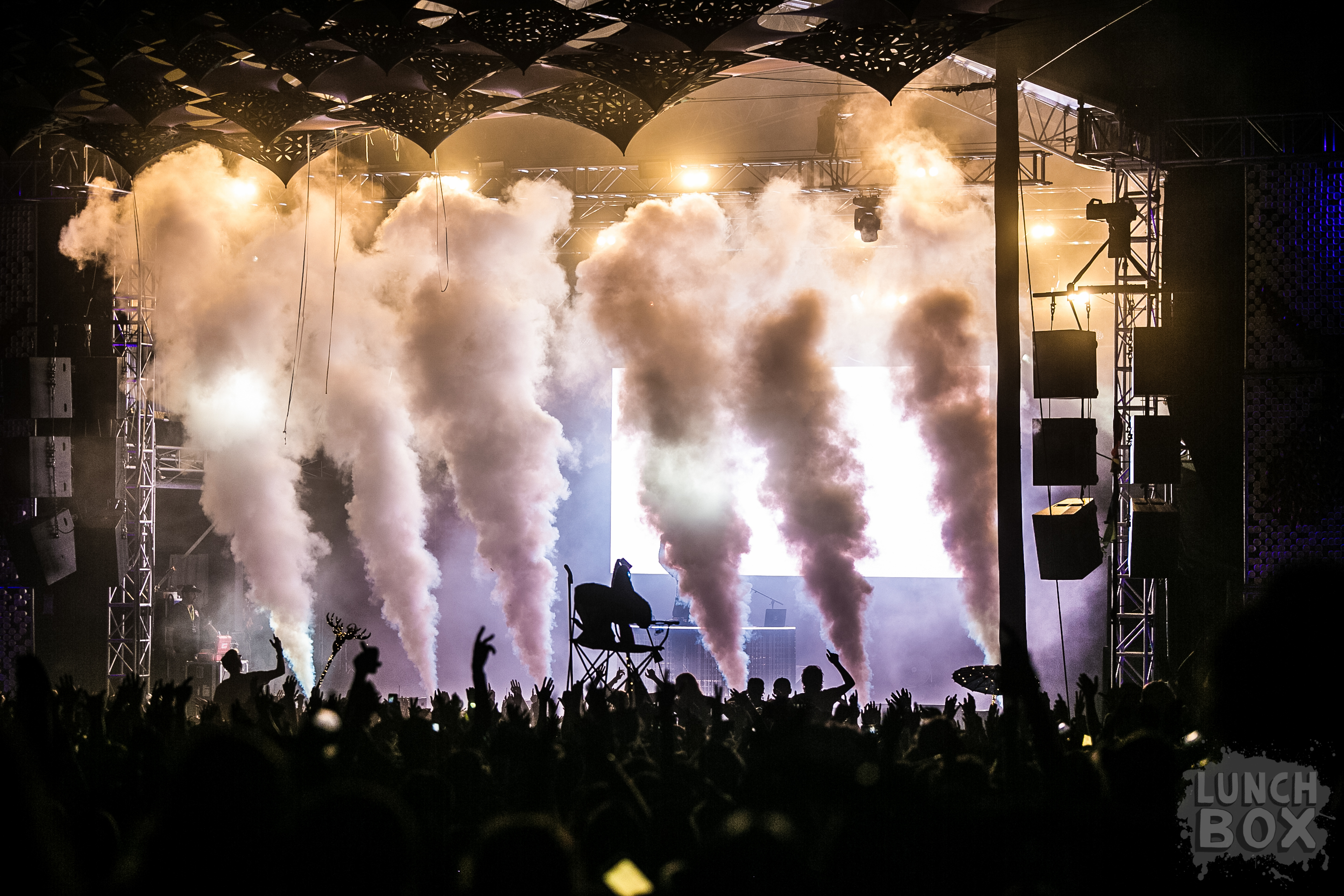 Mountain Sounds Festival ended on an absolute high, with Baranov singing the vocals to Peking Duk’s notorious High while almost everyone in the crowd climbed up onto someone’s shoulders. Surprisingly – no one was injured and we were all in full strength to join the many communal after parties blasting from bad quality speakers back at the campsite.

Bitten by some sort of hideous Aussie bug? Not a tick… much worse

It’s safe to say Mountain Sounds is an epic and authentic Aussie festival!